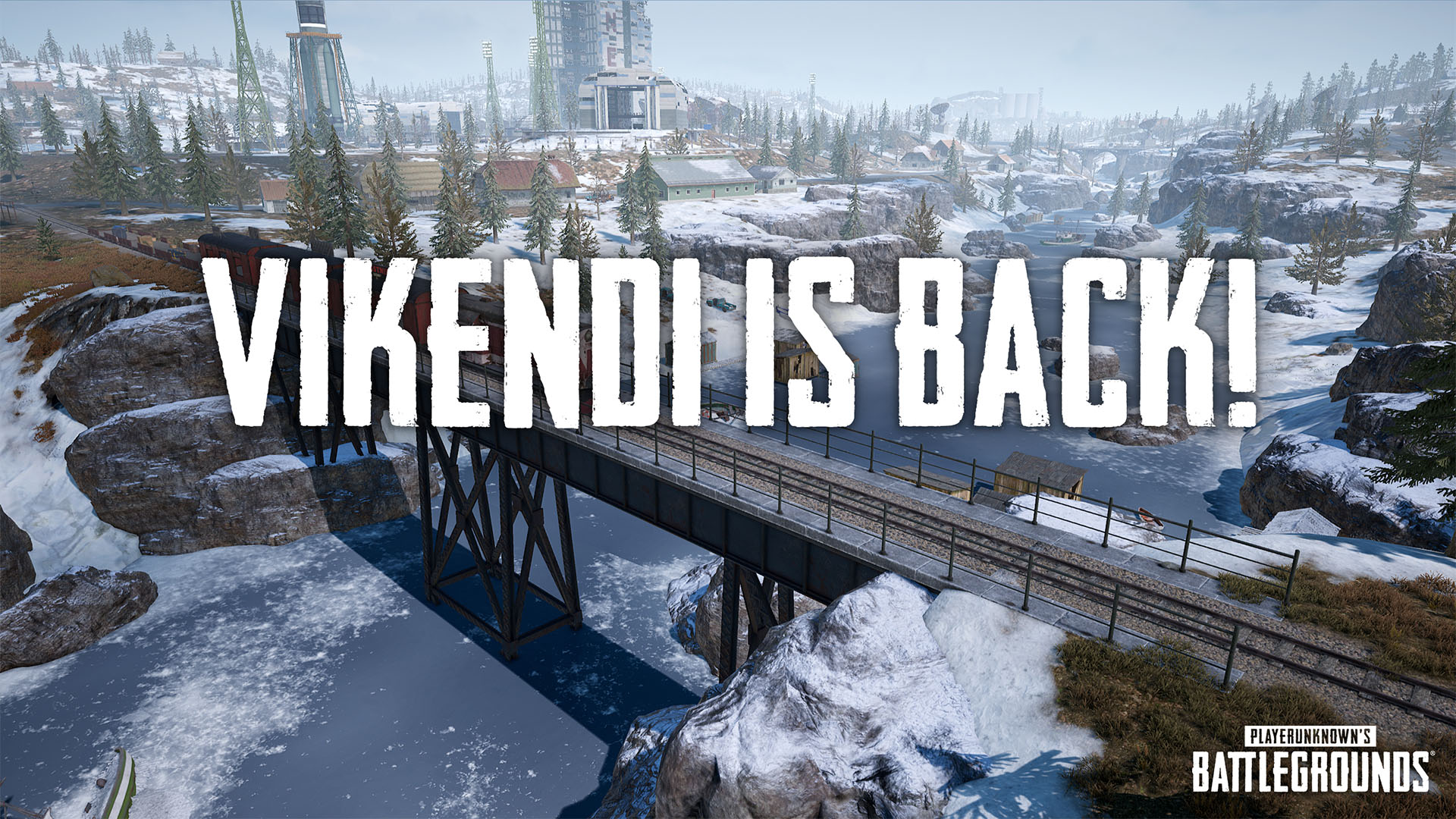 The snowy Vikendi map has returned to PUBG in update 7.1, featuring a new and improved Dinoland amusement park, terrain changes, and more! Check out the patch notes here

PUBG update 7.1 and its patch notes have dropped, and it’s winter in April for the battle royale. This major patch saw the return of the snowy Vikendi map, featuring a wealth of changes to make it an altogether better experience. That’s not all, there’s a battle pass for the new Vikendi with a wealth of free and premium rewards tied into it, much of which have to do with the improved Dinoland amusement park on the map.

PUBG dropped the 7.1 patch notes on April 22, 2020 alongside a fresh new trailer for the patch that you can see above which showcases the improved Vikendi. The map features the aforementioned Dinoland theme park in place of the original Dino Park, as well as a wealth of terrain and building changes, including a multi-branch railway system around the entire map. You can see the entirety of the official patch notes below.

Better than ever, with updated landmarks, trains and a slight change in season.
Trains have been added and can be found moving along multiple tracks across Vikendi
There is a major train line that extends along the perimeter of Vikendi, with 6 connected tracks towards the inland areas of the island
Trains stop temporarily at train stations across the map
Reduced snow cover
Snow cover is reduced more on the Southern areas of the island
Snowbikes and Snowmobiles have been removed
Motorcycle and Motorcycle with sidecar will spawn instead, being more versatile vehicles for the updated terrain
Weather will be either Clear or Snowy.
Moonlight has been removed for now, but will return with visual improvements at a later date.
General map optimizations have been made
You can play the updated Vikendi in custom matches
A new Cargo Depot has been added
Dino Park has been replaced by the bigger, more spectacular Dinoland
Abbey has been relocated to Mount Kreznik
Volnova now has much more cover
Tovar and Movatra have been removed
AS, KR/JP, KAKAO, SEA, EU, RU: Full map selection, you can select Vikendi or any other map individually.
NA: Vikendi will be playable via the featured map option, with all other maps being in a separate random map queue. We expect to have Vikendi available as a featured map for 1-2 weeks, but will monitor queue times closely and will return to full random matchmaking earlier if queue times begin to suffer.
OC/LATAM: Vikendi has been added to the random map pool, alongside all other maps.
Survivor Pass: Cold Front
Community Missions

All players can contribute to the community gauge to unlock videos and receive community skin rewards
1 video, 4 skins can be unlocked by accomplishing the community missions
To complete, Loot event items in public (normal) matches
As before, the community mission gauge is filled as such:
Disc piece: 1 point
Broken disc: 2 points
Old DVD: 3 points
On the Community Mission tab, you can see your personal contribution score and will earn XP towards your Survivor Pass
2000 XP per 50 points contributed
Season Missions

There are three tracks of Season Missions
Each track will be released monthly in April, May and June
Tracks that are locked will show the time left before they are unlocked
Progression Mission

Players can earn large amounts of XPs when completing Progression Missions
Tracks 1 and 2 are available to all players and contain a set of 8 missions each that increase in difficulty
Track 3 is open for Premium Pass holders and contains a set of 10 missions that increase in difficulty
Milestones are completed when a set goal is achieved related to daily, weekly, and challenge missions.
Challenge Mission

The Survival Title System is being shelved this update, in preparation for a new system making its way in-game in a future update alongside our new Competitive Mode.
Overview and Leaderboard tabs of the Season menu have been removed
A new Leaderboard will arrive with the introduction of Competitive Mode in a future update
New Weapon: Mosin-Nagant
Performance & Stability
These changes below were implemented to live servers on April 9 during maintenance.
Greatly reduced instances of hitching during gameplay. We will continue to make further optimizations where possible
Optimized the drop mesh of weapons and attachments in the world to reduce memory usage
Reverted new blood effects to version used prior to Update 5.3 due to unresolved crashing issues
Reverted blood effects include

New skins have been added

Crouching/standing repeatedly while ADS could cause the animation transition to stutter
No ADS transition animation while using the Canted Sight
Players could clip through walls/ceilings of buildings by vaulting or using ledge-grab
This issue was fixed with weekly maintenance April 9
Player’s view would momentarily be obstructed by any large backpack while ADS in a Motor Glider
Players could ADS briefly after entering the BRDM
When reviving in FPP the camera would sometimes be in the incorrect position
Healing/boosting prevented the passenger of a buggy from turning correctly
While prone in TPP players could ADS to unintended angles without their lower body rotating
Players could unintentionally use AR/DMR/SR in the Motorcycle’s rear seat
Characters would lean to the left while driving a Motorcycle after breaking destructable fences
Player’s camera would detach from the character after reloading a weapon while ADS in a Motor Glider
While holding throwables, in certain situations they could fall to the ground and emit effects for that player, without the grenade actually being used
Flare Gun could float mid-air while looking at the sky and pressing the ‘Inspect’ key
When a Molotov was shot mid-air flames wouldn’t propagate on the ground beneath the point of explosion
Throwable trajectory line wouldn’t line up with the direction the character was facing while in a vehicle
Player’s body could contort while aiming with a melee weapons while in a vehicles passenger seat
Tommy Gun’s rear sight would disappear in certain situations
Fixed an issue which prevented Sticky Bombs from dealing damage when multiple were stacked on top of each other
Fixed multiple situations where players would take unintended damage while riding a Train
Fixed an issue where players received damaged after jumping into each other
Fixed an issue on Karakin where the visual state of a destructible wall or floor could look different from player to player.
Fixed an issue where players could vault to an unintended location within the gym at Pecado on Miarmar
Fixed an issue where bullets could pass through certain walls at very long-range due to a change in LOD
Fixed an issue which caused auto fire mode to change to single after throwing a grenade in Team Deathmatch
Sound

Footsteps would be muffled after exiting a Motor Glider
UMP45 gunshots could be heard further away than intended
Bullet ricochet sounds weren’t being played
Fixed an issue which caused a water splashing sound to play when exiting a boat, Aquarail or BRDM on land
UI/UX

Sunswiped Sports Jacket was clipping with other items
That covers the entirety of the PUBG update 7.1 patch notes. Are you excited to return to Vikendi, explore the railways and towns and have yourself a fun time among the dinosaurs in the new Dino Land? Let us know in the Shacknews Chatty comment section below and be sure to follow our other PUBG coverage and patch notes for the latest on the game.